How to leverage existing channels to grow your Subtext

If you build it, they will come…. but only if you market it via popular, existing channels.

Before you launch, we recommend having 2-3 marketing strategies ready to roll out over the first 6 weeks of your campaign. We recommend choosing your strategies based on these criteria:

Once you’ve answered those questions, you can start to formulate your plan with some of the following channels. Don’t let us limit you though. Get creative!

Embed code: One of the simplest and most effective growth channels we’ve found across to grow all types of campaigns is with the embed the sign up form.; If you’re a publisher, we recommend embedding in all relevant articles. If you’re a content creator or thought leader, it may be the homepage of your website.

Success story: CNET’s Cheapskates text deals has averaged 226 new subscribers per day in its first month thanks to aggressive placement of the sign up embed code in article pages on their website. Who should try this: Hosts with lots of article traffic.

Launch article: Writing an article that introduces your text campaign and includes the sign up form is a strong way to get started., especially for publishers. Link to that article on your homepage, social or from a banner ad (see below), and watch the audience roll in. Local publisher Austonia in Austin, Texas relaunched their campaign with this article, along with a homepage pop-up  sign-up form and banner that included the sign up form, resulting in 98% month-over-month growth. Here's one more launch article for inspiration from USA Today. Who should try this: Everyone! 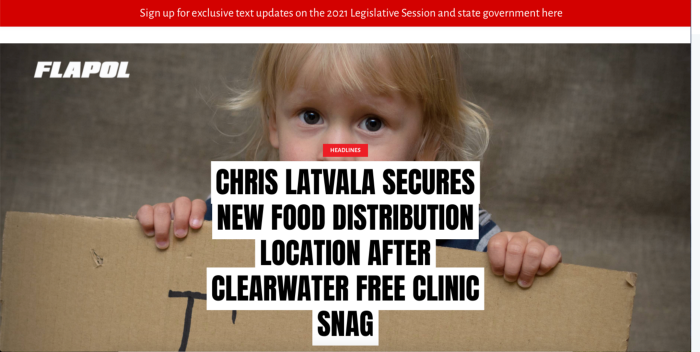 Banner on homepage: We know the largest number of visitors typically land on our homepages.

Success story: Florida Politics launched their campaign to cover the state legislative session in November 2020. The digital newsroom signed up 63 subs with an email blast, but it was the homepage banner that took their campaign from a group of loyalists to a large dedicated following. Within 72 hours of launching a homepage banner, their subscriber list grew by 775%. Who should try this: Hosts with lots of homepage web traffic.

Email newsletter: If you’re currently reaching your audience via email newsletter, then that’s the way to get the word out about your Subtext campaign. Texting isn’t just a shorter newsletter, but a fresh channel to engage readers who want to hear from you, but are fed up with inbox clutter.

Success story: USA Today’s Short List Elections campaign covered the 2020 presidential election from the beginning of the debate through the inauguration. This spinoff campaign grew USA Today’s Subtext audience by 5x in relation to the news org’s daily headlines campaign of the same name. The Short List team included daily reminders near the top of their newsletter in the weeks leading up to election day. They also reached out to their colleagues on the political team to share their campaign via newsletters as well as leveraged some PR done by the newsroom’s Editor-in-Chief. Who should try this: Hosts with strong email newsletters.

Social channels: If your audience lives on social, then meet them there with the Subtext news. As already discussed, one mention is not enough. Add your 10-digit number to your bio, have a regular posting cadence, where you not only tell people about the service, but you also share screenshots of your texts or responses from your audience.

If you care about San Francisco news, do sign up. https://t.co/TAhzEjpUHF pic.twitter.com/6lpfuNBxf2

Success story: Mission Local journalist Joe Eskenaz has 6k followers on Twitter. He’s San Francisco’s go-to reporter on City Hall. Joe has been on Subtext for nearly two years and has built an audience that’s a good mix of “politico insiders” and local citizens who just want to stay informed. We challenged Joe to grow his audience last year and with one tweet (see image) he added 70 paying subscribers. There was a GREAT conversation that followed, including testimonials from people who said it would be a steal at 10x the price. The new subs from that one tweet added an extra $3,360 in additional revenue each year. Who should try this: Hosts with a large and/or dedicated social following.

Audience growth is a marathon, not a sprint! Set some realistic goals for yourself, check out this further reading on audience growth, and let us know how we can support you in reaching them.